‘An Evening of Poetry and Prose’ 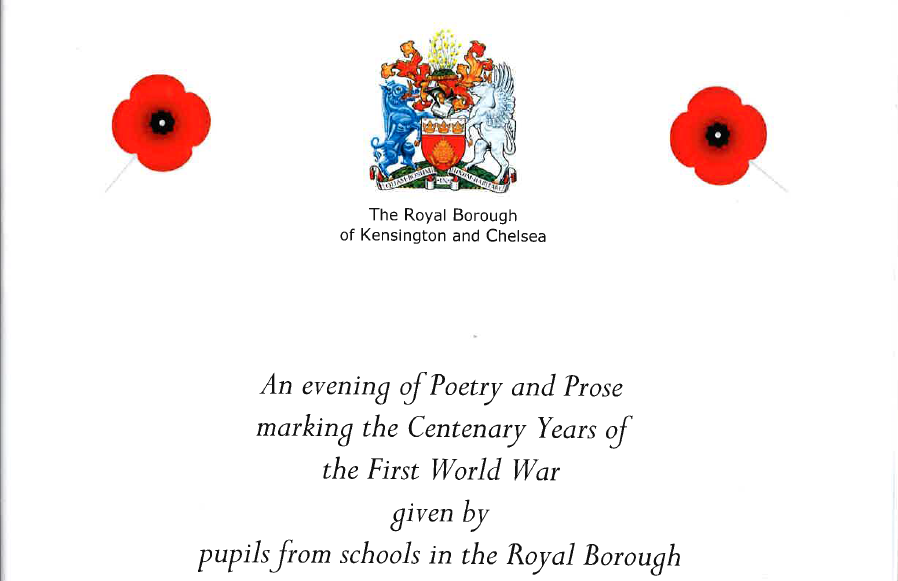 14 Nov ‘An Evening of Poetry and Prose’

Posted at 10:20h in Curriculum, Events, Parents by chelsea 0 Comments
4 Likes
Share
On the evening of the 10th November Chelsea Academy students were invited to perform at ‘An Evening of Poetry and Prose’ to mark the centenary of the First World War. The event was hosted by the Mayor, Councillor Mrs Elizabeth Rutherford J.P. and The Lady Borwick M.P. and had lots of illustrious guests in the audience including prominent military figures and Nicholas Coleridge C.B.E. who is the President of Conde Nast International and Chairman of the Victoria and Albert Museum. He gave an enlightening talk on the birth of ‘British Vogue’ which happened during the Great War. Chelsea Academy were one of 6 schools from the borough asked to perform.
Four Year 11 students, Blerim Gashi, Ted O’Neill, Irfan Raja and Reem Al-Shamisi read a script in which 4 soldiers from the trenches are all writing home about the Christmas Day Truce. This was a poignant piece which was performed beautifully by our students. Also Ross McKenzie-Solomon from Year 7 played a hauntingly beautiful piece of music on the piano and was congratulated by many of the guests on his talent. The students were all given certificates and we were also presented with a parcel of books for the Learning Resources Centre.
After the event our students were invited to the Mayor’s parlour for canapes and to meet the members of the audience. All of the students involved were phenomenal ambassadors for the Academy both performing and afterwards when chatting to the distinguished guests.