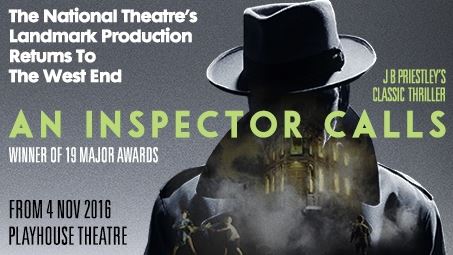 Following two years of studying Priestley’s ‘darkly sinister’ classic “An Inspector Calls”, some Year 11 English students finally had the opportunity to see his ideas captured on stage at The Playhouse Theatre.

Stephen Daldry’s multi-award winning adaptation certainly had some stark differences to the original script, with the lift of the curtain initiating young children to run through the audience and on to the stage, accompanied by dark music of which they eerily sing along to. Cue the thunder and rain to echo through the theatre, and the sombre and dramatic tone for the rest of the performance was set perfectly. On the upper left of the stage, we saw the Birlings as they discussed Sheila’s engagement, with Dauldry returning strictly to the script. This part of the play is set closed off in a stereotypical, almost nursery like home in a slightly disorganized state, not dissimilar to that in “There Was An Old Woman Who Lived In A Shoe”. The pompous, irrelevant talk of Mr. Birling echoed through its tiny walls, being impeccably hard to hear.  The Inspector quietly appeared on stage, but of course possessed a certain level of confidence that can’t quite be ignored. The play then kick started into action, with the fiery comments of the Inspector proving to be humorous but still impactful. The tactful use of theatrical devices throughout, such as the previously closed off house at the start of the play opening as the Inspector begins to open up the characters previously closed off views of morality proved to be incredibly interesting to watch, and added a certain level of excitement to the play that simply can’t be obtained by reading the script over and over again. Whilst the irrelevance of Edna proved to be humorous, her quiet presence slowly became sinister, particularly when the house suddenly set ablaze after the Inspector’s famous final speech, making us question how much she, and the lower class as a whole, really know. The melancholy yet thought provoking ending (of the working class singing a labor song) added a unique touch to the play and provided another layer to the thematic sandwich that is “An Inspector Calls”.

Although some may argue that Priestley’s version is perfect as it is, Stephen Dauldry truly wrung out the message to a modern audience, who perhaps are accustomed to the flashing lights and action that accompany current dramas today. The play was incredible, impactful and eye-opening, and I urge you to go and see it for yourself, regardless of whether you’re studying it for GCSE or not. 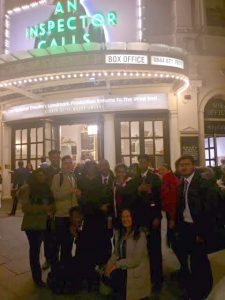